May’s CE event took place at Tony’s Di Napoli on the upper east side. Members excitedly gathered for the evening’s event to dine and reconnect with colleagues.

President, Dr. Amisha Arya, and President-elect, Dr. Yi Guo, greeted the audience and opened the evening’s agenda. The first presentation was delivered by Maryam Banikazemi, MD, from New York Medical College. Dr. Banikazemi presented Gaucher Disease: Emerging Therapeutic Options. Dr. Banikazemi focused on Lysosomal Storage Disease (LSD). She described how the origin is from a defective protein which causes a deficiency in an enzyme leading to an accumulation of a substrate. All of these cases are familial and are progressive disorders.

In gaucher disease, there is a deficiency of glucocerebrosidase enzyme that breaks down a certain type of fat molecule. The lipid engorged cell, called Gaucher cell, is primarily seen in the spleen, liver, and bone marrow. 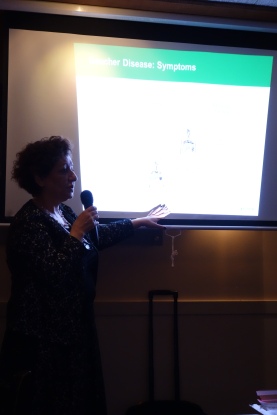 The first line oral therapy is Cerdelga (Eliglustat), a glucosylceramide analog, which replaces the enzyme to prevent accumulation of fat deposits. Patients are genotyped to analyze their metabolism. Patients taking Cerdelga have been seen to have reduced liver and spleen volume, and increase in their hemoglobin and platelet count. There is a safety warning for patients who have existing cardiac issues, because it has caused increases in ECG internval. Cardelga also requires dose adjustment for renal and hepatic impairment.

Next, NYSCHP’s VP Public Policy, Dr. Monica Mehta, gave members a CDTM update. Dr. Mehta emphasized the importance of pharmacist advocacy in the current Collaborative Drug Therapy Management (CDTM) bill (A.5805 (McDonald) / S.4857 (LaValle). Our goal is to extend and expand CDTM for pharmacists beyond teaching hospitals. She urged members to join together and sent letters to our congressmen, which she will help guide members to do within the upcoming weeks. Our participation and advocacy is critically important since the legislative process ends on June 19th, 2015. 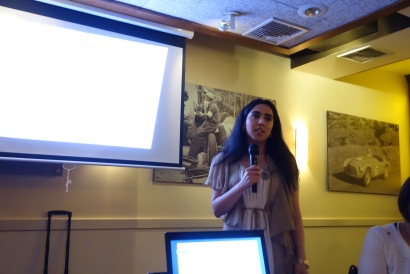 President-elect, Yi Guo, introduced the student clinical pearl presenter, Kolaleh Hassan of Touro College of Pharmacy. Kolaleh presented Emerging Treatment of Mitochondrial Disease (MID) in Pediatric Patients. MID is caused by a buildup of free radicals. It is commonly known as encephalopathy and is a genetic and progressive disorder. Only 8% of patient are diagnosed by the age of one and only 28% of patients are diagnosed by 18 years old. Treatment to reduce free radicals include vitamin B, vitamin C, and coenzyme Q10. It is also important for patients to avoid mitochondrial toxic drugs such as certain anti-depressants, antipsychotics, barbituates, anti-anxiety medications, antibiotics, and anti-cancer treatments.

President-elect, Yi Guo, introduced our CE speaker, Immediate Past President, Dr. Mary Choy. Dr. Choy is an Associate Professor at Touro College of Pharmacy and a clinical pharmacist at Metropolitan Hospital. Dr. Choy’s presentation was titled Writing in Pharmacy: From Inspiration to Publication.

Dr. Choy emphasized the importance of thoroughly researching a topic and to understand the quality of published sources to find out how developed your idea is. Such examples of writing samples include abstracts, monographs, case studies, review articles, and book chapters. She distinguished the responsibilities of authorship from first author to last author listed in a citation. She also described the necessary changes needed between the first draft, second draft, to final draft.

Dr. Choy explained when tables are used and when figures are used. Upon publication, the data, tables, and figures belong to the journal which has published the literature, and must be cited if referenced in another writing sample.  Lastly, Dr. Choy named programs used to help compile references: Zotero, Endnote, and Refworks. Referencing other’s works is vital when publishing and must be done correctly. The evening’s insightful CE presentation concluded with a question and answer session.

Director at Large, Dr. Karen Berger, congratulated NYCSHP’s flag football team on a great season together. She extended the invitation to all members and friends to come out to Roosevelt Island for the next season. 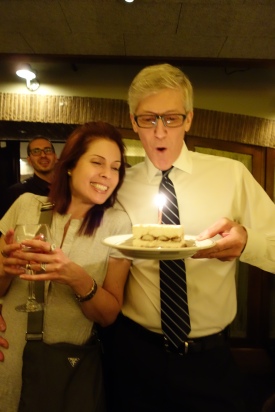 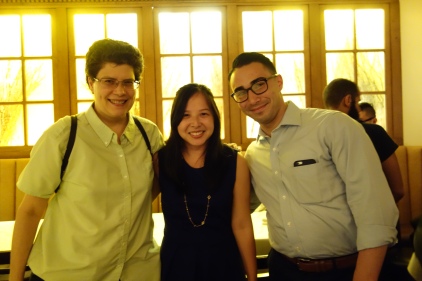 Article and photos by Jamie Chin